After finishing the layout of a PV plant, the next important and time consuming task ist the electrical design. This is a very complex task and needs a sophisticated and intelligent integrated software solution to be applicable for the individual layouts. Each company or even the developer has kind of its own scheme to design an electric layout, so the software should be as flexible as possible.

To achieve this, a unique concept was developed for HELIOS 3D.

The workflow starts with the definition of several basic structures, describing first an abstract, logical electrical connection. This structure is later on refined by assigning the specific parameters of physical components and real world devices. So finally the physical rack layout can be connected to an electrical cable layout.

The Device Hierarchy (Picture 17) describes the basic electrical structure of the electrical system.
The Device Areas contain the physical, electrical devices (inverter, transformer, ...) with the assigned amount and specific type.
The Cable Trenches describe the distribution of the cable trenches and the assignment to the fields.
The Layout Zones contain the selection sets which define the assignment of the specific device hierarchies.

These structures and this multiple possibilities deliver the degree of flexibility, that is necessary for a total individual electrical layout.

The device hierarchy (Picture 18) describes the logical sequence of the electrical components from the trunk (grid connection) of the tree to the last branch (modules). In combination with the sequence and place of the combiner boxes it defines, whether a central inverter or string inverter concept is used. Combiner boxes can also be stacked to collect their output to fewer cable connections. Each device is connected by a cable symbol where the connecting cable specs can be defined. This can be a list of cables with increasing cross sections. Any number of hierarchies can be created.

After the basic structure is defined, the logical devices get their final technical specifications by assigning specific electrical devices with their parameters (Number of connections, max voltage, max. current,..)
These components can be selected from an article database. At the cable symbol for each connection several cable types with different cross-sections can be assigned (Picture 18). The default cable, that is used for the initial layout is on top of the list. In a future version of HELIOS 3D, it will be possible to define the maximum allowed power dissipation, and HELIOS 3D then can check for cable lengths, where this parameter is exceeded. As a consequence HELIOS 3D will select the specific cable, that keeps losses within the specs.
A special tool comes with the string configurator (Picture 19). With its separate dialog box, it is possible to describe not only the physical connection of the single modules on a rack, but also the assignment of the strings to the inputs of the selected combiner box/string inverter.

With the two modes to define strings “Quick and easy” (rack oriented mode) or “Expert” (fully individual string design) any requirement for flexibility or speed can be covered. Any number of definitions can be defined and saved. In Expert mode the string definition need not match the horizontal multiple of modules on the rack, but can have any length necessary to meet the technical requirements.

The device areas (Picture 21) have two purposes. They are a connecting element for the definition of trench structures and they contain the type and amount of electrical devices that will be placed by HELIOS 3D at this specific area when it assigns the string structure to the physical layout. The total amount of devices that need to be placed to cover the available power output is distributed between these device areas.

The cable trenches contain all the cables that transport the power to the different devices in the electrical chain. The cable trenches are initially drawn as polylines and have to be registered in HELIOS 3D as trenches. This creates a special type of object that can be connected to other trench sections and to the device areas, forming the individual structure necessary for the PV layout. If segments of the trenches are edited (shifted, shortened, extended) the other trench segments connected to this one will be automatically adjusted.

The cable trenches have a depth parameter and can be adapted to the terrain contour in 3D. This depth is considered in the cable length calculation to achieve high precision results.
In future HELIOS 3D will be able to list up all cables running through a specific Cable trench segment. So it will be possible to calculate even the necessary size of the trench segments to hold all the cables.

There is also a visual feedback for the designer to see the status of a segment. Initially after registration as trench the segment shows two circles. After connecting one end of this segment to a device area it shows a dot and when the device hierarchy has a completely defined structure, the connecting point also shows an arrow head pointing in the direction to the electrical current flow (Picture 21).
The final task is to assign the fields to the trenches that will be used to contain the cables.

The layout zones are a special kind of selection sets, (Picture 20) created to individually assign the string definitions. HELIOS 3D can them automatically or the user can make any selection he needs. They can be edited, split and connected to contain the individual racks, that should have a special string definition. The sets have a color assigned to differentiate between them. 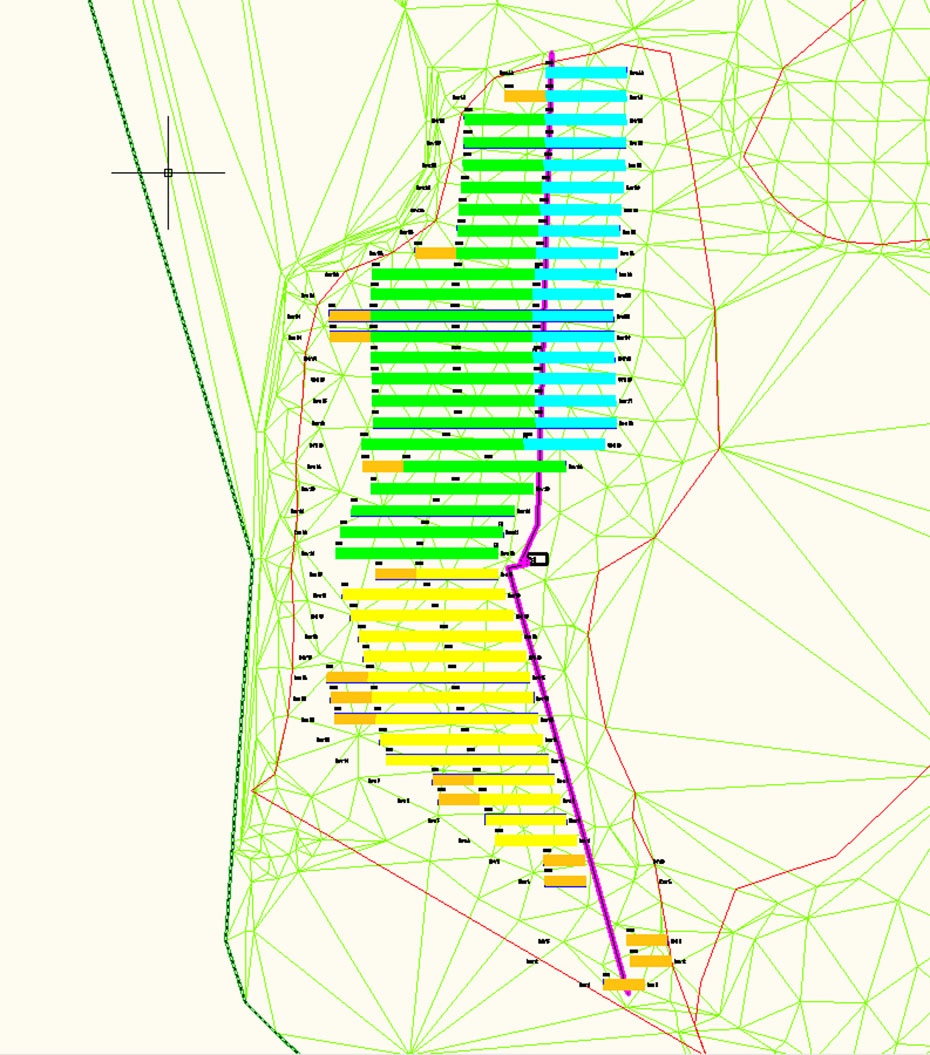 The next step is to assign a device hierarchy and its string definition to the selection sets. The result can be seen in Picture 21. The string consists of two racks shown by the two colored triangles in the upper part of a rack, pointing to the trench they are connected to. The picture also shows the two strings in the racks as two lines with the polarity signs. The necessary combiner boxes a placed near the cable trench and the device area is filled up to its defined capacity with the devices that collect the power.

In Picture 22 the display of the individual cable containers is switched on to show the cable segments in 3D. This visual feedback creates confidence in the way HELIOS 3D is calculating cable length.

In addition a numbering scheme is applied to the strings that can be defined in the device hierarchy tab to keep records how to connect the racks to the next device.

The electrical structure is derived from the string assignment and the string definition (Picture 23). It contains the complete connection list and the length of the cable segments. They are accumulated depending on the cable type and can be printed in a cable list. A future option will be to transfer this connection scheme to AutoCAD Electrical or to AutoCAD ECSCAD to create a complete documentation. 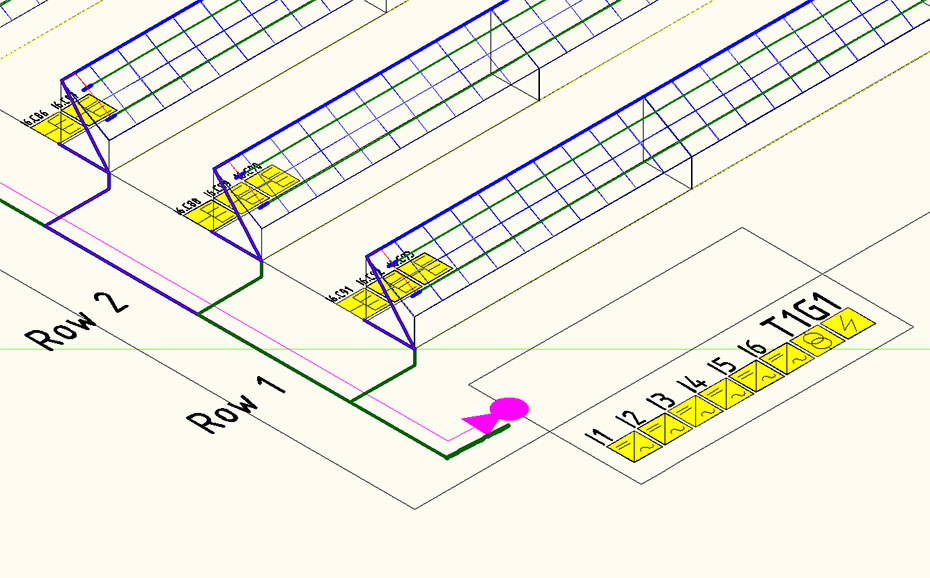